skip to main | skip to sidebar

Its poetry month and we are taking the chisme box and our favorite Latina poets with us to the 10th annual Poetry Fest @ The Harold Washington Library.

Poetry Fest is a free festival of poetry readings, workshops, performances and discussions, all under one roof.
Posted by Irasema Gonzalez at 9:15 AM No comments: 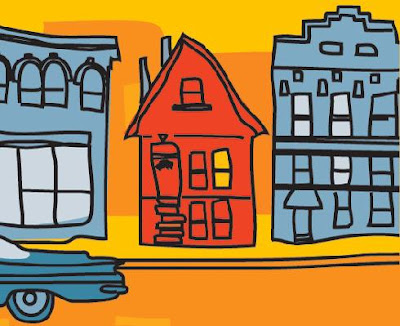 One Book, One Chicago events are still ongoing. I hope you have had a chance to read or revist The House on Mango Street. Maybe you had the opportunity to see Sandra Cisneros read at the Harold Washington Library. Through my work with Proyecto Latina I had the exciting opportunity to interview her, that interview aired on Radio Arte tonight and will be posted here for folks that missed it. I hope you can join us this Monday, April 20th for Proyecto Latina, mangos are our theme and we are excited to have a preview of Tanya Saracho's musical adaptation of The House on Mango Street. Tanya also shares the art process of how she took a lyrical narrative and modified it for the stage. 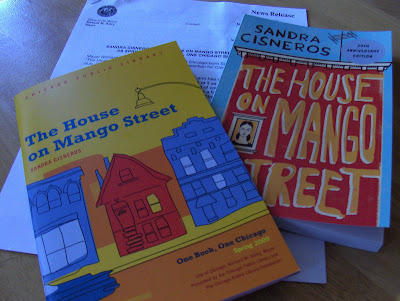 The House on Mango Street was announced as the next pick for One Book, One Chicago earlier this week.

I have a well thumbed and authographed copy of this book already but I was delighted to get a copy of the new edition. It not only has a beautiful new cover but it also includes a moving introduction by Cisneros where she shares the story of writing this book and also on how she became a writer and the series of life events that led her to writing Mango Street. Plenty of food for thought in those first few pages.

I want you to also re-discover this book and I hope you have a chance to read the new introduction too. The Chicago Public Library has hooked up Proyecto Latina with FREE copies of The House on Mango Street so make sure to join us on March 16th, our feature will be the Vida Bella Ensemble with the Brown Girl Chronicles.

There's a calendar full of citywide events and you can get an electronic version of the resource guide here.

Also, you can catch up with me at a couple of events this Spring: I will be co-hosting Proyecto Latina in April and contributing on a panel on Latina Creativity in Chicago.

Panel Discussion: Celebrating Latina Creativity in Chicago
Thursday, April 2, 6:00 p.m.
DePaul University—John R. Cortelyou Commons Building
2324 N. Fremont St.
Join a distinguished panel of artists who will discuss the path of their own creative journeys, examine the ways in which their work has been influenced by Cisneros, and trace the dynamic relationship between artists and their communities. Panelists will include Professor Bibiana Suarez from the Department of Art, Media, and Design at DePaul University; Irasema Gonzalez, poet and founder of Tianguis Books; Coya Paz, co-founder of Teatro Luna and Visiting Multicultural Faculty in DePaul University’s Theatre School; and Tanya Saracho, co-founder of Teatro Luna who is adapting The House on Mango Street for the stage.
Co-sponsored by the Women’s Center at DePaul University. Free and open to the public; no reservations required.

Posted by Irasema Gonzalez at 1:12 PM No comments:

The flow of spanglish & power of language

It was exciting to see what people had to say about our first question. It got me thinking that as a bilingual educator-FOR LIFE-I am finding that language is very misunderstood. In these times of looking down upon Spanish, immigrants, ebonics, we often forget that each language is beautiful and evolving. It is ever reflective of our place and time in the world. Nancy enlightens us with her words, "...could the f word come from "fuck you" and could fuku americanus be really as simple as "fuck you americans". Maybe the fuck you was returned to a Dominican and since we all [know] the strength of the return Fuck you, it probably stuck as a damnation..who knows..I am still savoring on that." There is no right language or wrong language. There is however power in crafting a phenomenal message.

Junot does this exceptionally well. I get his FLOW! The flow of mixing languages, thoughts that communicate. As ixchel33 put it, ”Seamless is a good word, I hadn't even noticed that there were words in Spanish, I didn't bat an eye when I read them” Why? ‘Cause the message is clear...well, at least for bilingual/bicultural readers.

Maureen shares the perspective of a non-native speaker of Spanish, “ Diaz just puts in the Spanish and lets you deal with it.” Rich says, "I say, no italics for Sterling Brown*, no italics for Junot Diaz. We're knee-deep in the new American idiom, y'all. Whether or not some folks are ready to accept that, of course, is a whole other story." Language is powerful!

I remember when I first discovered that I spoke Spanglish in my early twenties. I looking up at the sky (or my brain) searching for the best word after speaking English that would describe my thinking. This word was in Spanish not English! Ah yes…perfect! Is that what Junot did as he wrote Oscar Wao? How beautiful to be able to do that with your mind. Have one powerful message using words from different languages.

Walter Mosley, author of Devil in a Blue Dress and Blonde Faith states that Wao “is a book that speaks in tongues”. In more ways than one! Not only is Junot speaking to us in ethnic tongues, his references of sci-fi and comic books are definitely specific to a segment of American pop-culture language, and he also speaks in the tongue of Latin American history. Maybe, just maybe this is why La Mujer Maravilla (Love your tag name!) says, " The language seems more authentic."


“I’ll think of African slaves screaming this curse word from the depths of their pain,” Jessica points out in reference to the word Fukú (Zafa! Just to be safe ;) Do you see the impact…the image…the context…the history that it brings? What a wonderful way to engage in history. Alejandra Ibañez captured my sentiments exactly, “It left me yearning to learn more about Dominican history.” I wonder if we can use this book with young people in high school?

*"In 1933 Sterling Brown published his first book of poetry Southern Road. It was a collection of poetry with rural themes and treated the simple lives of poor, black, country folk with poignancy and dignity. It also used authentic dialect and structures..." --from wikipedia
Posted by Cynthia Nambo at 6:09 PM 4 comments:

Its been a busy February on my end. I had told my friends that I was going to take the first part of the year slow, to transition into my new skin as an online retailer, but the Universe seems to have other plans and I've hit the ground running. The favorite part of my job is the wonderful opportunities to meet and hang out with some amazing people, this month I interviewed three amazing Latinas and walked away with gifts I can't wait to share with you. I'll be sharing more on that in the following days. In the meantime a preview: 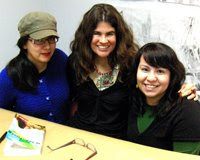 Jenny Priego and me with Stephanie Elizondo Griest at the the reading of Mexican Enough this past February 7th. Check out my interview with Stephanie here. 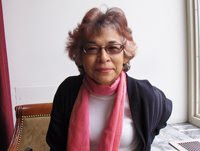 A morning coffee and chat on the first day of AWP* with elena minor publisher of Palabra. I'll be airing and uploading that interview soon. 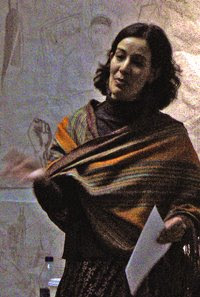 Michelle Otero author of Malinche's Daughter, featured at Proyecto Latina this past Monday. Couldn't miss the opportunity to interview Michelle either, that will also be aired and uploaded soon.

*I know AWP has passed, but Francisco Aragon summarized Latin@ participation at this years conference at the Letras Latinas Blog. He lists the following, "57 Latino and Latina poets, writers, teachers, other literary folk are taking part on 34 panels." You can get a more the four part breakdown on his blog.
Posted by Irasema Gonzalez at 11:07 AM 1 comment:

The Dominican “F” word, can you even say it?

"They say it came first from Africa, carried in the screams of the enslaved; that it was the death bane of the Tainos, uttered just as one world perished and another began; that it was a demon drawn into Creation through the nightmare door that was cracked open in the Antilles. Fukú Americanus, or more colloquially, fukú --generally a curse or doom of some kind; specifically the Curse and the Doom of the New World. "
--from the introduction to The brief and wondrous life of Oscar

All it took was the first sentence...of the introduction! Junot Diaz reached up from the page, placed a wizard's spell on my imagination. I devoured the book and lamented when life forced me to put it down. Being a bookworm was so much easier when I was a kid, when I could afford to spend an entire evening or weekend with my nose in a book.

We hope that you have read the introduction and chapter 1. If you are like me, you probably kept pressing forward. This is definitely a page turner. We plan on taking the book discussions a little slower to help us process the book. We ask for your patience since this is the first time we do this and we are learning as we go along.

Cynthia and I have met a couple of times to discuss our book club goals and timeline. During our meetings every time I say, fukú. Cynthia promptly follows up with a, zafa. This makes us laugh, a little nervously, after all we are Latinas, we can't help superstition. We might be Mexican but we understand Junot's reference, "to extraordinary tolerance for extreme phenomena." We take careful mental notes on antidotes and even begin to avoid saying fukú, instead call it the Dominican "f" word. So, our most pressing question right now is in the title of this blog post, can you even say it?

More food for thought. These questions are regarding language.
Spanish words and phrases appear unaccompanied by their English translations. What is the effect of this seamless blending of Spanish and English? What if Junot had stopped to provide translations at every turn? Why does Junot not italicize the Spanish words (the way foreign words are usually italicized in English-language text)? Are you bilingual? Do you italicize or resist?

We want you to hear from you, chime in via the comments, you can address one thought, or address multiple questions.*

*Cynthia and I are seeking to develop a safe place for honest and open dialogue. Language is powerful, let's exercise some tolerance and be open to opposing views and if debates arise let's do it respectfully.
Posted by Irasema Gonzalez at 9:39 AM 16 comments:

"In praise of the chapbook"

I got word from Momotombo Press publisher, Francisco Aragon that the following article appeared in the El Paso Times. For those new to the world of chapbooks, Daniel A. Olivas sums it up nicely in a short paragraph, "mini-collections of poetry, fiction or essays that can whet the appetite of adventurous readers." The article goes on to share the history of Momotombo Press, and also includes a great review on Momotombo's latest title, Dear Jack, a collection of experimental poems.

Posted by Irasema Gonzalez at 6:12 PM No comments:

Bookclub reading: For Oscar Wao we are reading about 56 pages per week.